With the World Series of Blah over, and the official start of the off-season upon us, it's time to shake off the cobwebs and overcome the bit of blog writer's block I've been suffering through recently.  (Is it writer's block if you just don't have anything interesting to write about?  Isn't that writer's apathy?  I guess I could have done a few posts during the World Series featuring past Phillies' baseball cards of Cliff Lee, Pat Burrell, Aaron Rowand or Mike Maddux, the Rangers' pitching coach, but I couldn't get myself motivated enough to scan in any of their cards.  But I digress.)
I recently received in the mail a nice surprise package of various Phillies baseball cards, mostly from the year 2001.  It was a pleasant pick-me-up, and I sincerely appreciated the gesture.  As he does every year at this time, Ron from Section 36 cleans out his baseball cards from ten years ago in order to make room for the upcoming new releases.  (Last December, I received a nice stack of Phillies baseball cards from 2000.)  Does it seem strange to anyone else that the year 2001 was already ten years ago?
The 2001 Phillies finished second in the NL East during Larry Bowa's triumphant return to the city where he enjoyed the finest years of his playing career.  By all accounts, it was a successful campaign as the Phils spent the entire season in either first or second place.  After almost a decade of suffering through mediocre, sub-.500 teams, it seemed as if we were finally turning the corner.  Of course, it was a long corner to turn, and the team wouldn't break through into the Postseason until 2007.
Burrell, Bobby Abreu, and Scott Rolen led the offense, while the pitching staff was anchored (?) by Robert Person, Randy Wolf and Omar Daal.  Section 36's package contained a fair share of Burrell, Mike Lieberthal and Doug Glanville cards.
One of the cooler cards in the package was this 2001 Topps Marlon Anderson card.  This card was produced on a day when the conveyor belts at the Topps factory must have gone screwy, as the gold foil with Anderson's name and the "Topps 50 Years" logo is stamped not on the front, but on the back of the card.
Looking through this stack of 2001 baseball cards, I was struck by the variety and uniqueness of each of the sets.  I was also struck by this surprising thought - I miss Fleer and Upper Deck.  Topps has just gotten too predictable with its releases and it was always nice to have a bunch of different flavors to choose from, like Fleer Ultra or Upper Deck Black Diamond.
Finally, Ron included a quick note in the package, written on the back of what used to be a full score card.  The score card was from a Phillies-Red Sox game in which Nomar Garciaparra hit his 100th career home run, as noted by Ron in the "Game Notes" section.  With the help of Baseball Reference, I determined the partial scorecard was from June 3, 2000, when Nomar connected for his 100th career home run off Wolf in the 6th inning.  The Phillies would eventually win the game, 9-3, led by Lieberthal's two home runs and five RBIs.
Posted by Jim at 10:45 PM

Glad you liked the cards, and I could help with writers block.

That Marlon Anderson card was weird. I have a bunch of them. Some of them have the wrong player's name in gold on the back. The really weird part? I also have the corresponding card with the player pictured, and the other player's gold...if you followed that. How they all stayed together to get to me is strange.

Nice research on the scorecard. My only game in Philly...and the Sox lost. Maybe next time. 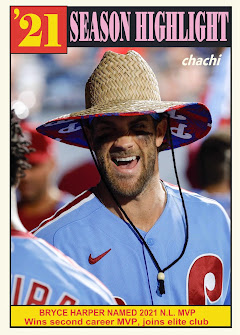