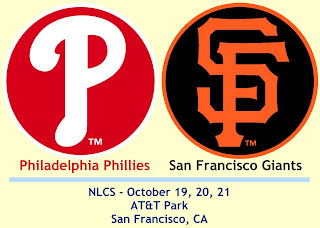 What's What:  The series is tied at one game a piece after the Giants and Phillies split at Citizens Bank Park.  It's now a best of five series and the Phillies need to take two out of three in San Francisco.  Three out of three would be awesome, but I don't want to appear greedy.

2010 Chachi Update:  I still need to find a few spare moments to create card #66 in this year's Chachi set for NLCS Game 2.  I'd like to feature the stars of the game, Roy Oswalt and Jimmy Rollins, on the card.  Any ideas for the tagline to use for the card?  Roy O. and J. Roll Deliver Victory?  Phils Take Game 2 Behind Roy & Jimmy?  I Would Have Rather Had Tickets for Game 2?

Work It:  A busy work schedule has curtailed my ability to post more regularly during the NLCS.  However, I was successful in scheduling just one meeting today, from 10 until 2.  Shortly after the meeting ends, I will politely excuse myself as I deal with the cold/stomach virus/hangnail/headache I've recently contracted.  In my office, this illness is unofficially referred to as Red Phever.  Red Phever can only be cured by disconnecting from work and focusing on a Phillies' baseball game.  You can look it up.

King Cole and Big Brown: Cole Hamels hopes to build upon his NLDS Game 3 shutout and shut down the Giants' offense.  Ryan Howard hopes to find his power stroke and connect for his first home run of the Postseason.  (Although Howard's hitting .429 in the NLCS with two doubles, he has yet to drive in a run.)

Hmmm... how about, "Royin' and Rollin'" on the front and on the back, "Roy rocks while Rollins helps Phils roll."

Not bad at all!