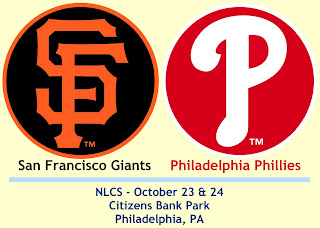 What's What:  The Phillies need to win two in a row to defeat the Giants in the NLCS and advance to the World Series for the third year in a row.  Much has been made of this feat, as they would become the first National League team to pull this off since the 1942-1944 St. Louis Cardinals.  They'd face the Texas Rangers in their first World Series and the Yankees will be watching from home.  Tensions will be high in my household this weekend.

Message for the Phillies:  Just win.