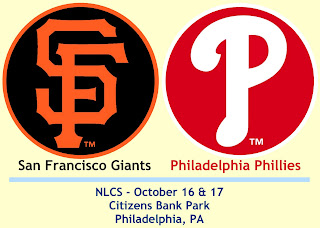 Roster Moves:  The Phils dropped Phillies Room favorite Greg Dobbs from the NLCS roster and added pitcher Kyle Kendrick, opting to go with 11 pitchers for the potential 7-game series.  Dobbs was one of five Phillies, along with Ross Gload, Brian Schneider, Joe Blanton and Antonio Bastardo to be on the NLDS roster, but not appear in a game.

Other Stuff:  The last time these two teams faced each other, in mid-August, they were actually both battling for the NL Wild Card.  Since then, the Giants overcame a 3½ game deficit to knock the Padres out of the Postseason completely and the Phillies quickly erased the two games separating them with the Braves.


The Phils and Giants have never faced each other in the Postseason, although they came very close in 1993, when the Giants finished just one game behind the Braves in the NL West.
First Pitch:  Former Giant (1972-1975) and Phillie (1975-1986) Garry Maddox will throw out the first pitch prior to Game 1.  Maddox was traded from the Giants to the Phillies in May 1975 for Willie Montanez.  Maddox was featured with the Giants in the 1975 Topps set, so I've presented here the 1975 Topps Traded card that should have been.  I've used a picture from the Phillies' 1976 Yearbook for this card.

Cool Idea:  Over at Capewood's Collections, you can track the baseball cards of all the key players from the Phillies' play-off teams, position by position.  Matt's doing the same for his Giants over at A Giant Blog.
Prediction:  So my plan this week to post the remaining 2010 Chachi cards (up to this point) fizzled.  Maybe I'll catch up during the Phillies' off days between the NLCS and World Series?  Phillies over the Giants in 5.

This is going to be fun.  Go Phils!

Phils in five? Could be. But with Lincecum, Sanchez, Cain and Bumgarner, we might see Giants in four. Could be. Giants in seven.

After last night's game, I believe I meant Phils in six.