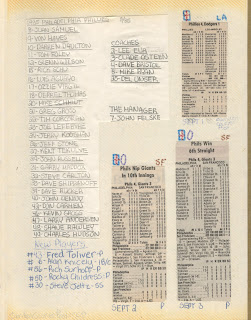 I've always had the need to know which players were on the Phillies' current roster, and for as long as I've been a fan, I've been able to rattle off the 25 names currently available to suit up on any given night. When I started this blog, one of the first things I added was a list of the team's current roster (look left), which I update as soon as I get wind of a transaction. Each name on the roster is linked to that player's baseball cards I've featured so far in The Phillies Room. Go ahead and click around a little - it's good fun.
From opening day until August 31st, there are 25 men on the active roster and then on September 1st, something glorious happens.  On September 1st, teams have the option of expanding their rosters to 40 active players.  I like this.  I know there are some who feel it cheapens the pennant races by altering the rules of engagement for the final month of the season.  But I like it.  I like that Paul Hoover is on the roster now as a 3rd catcher, and he'll (hopefully) only play in one game - the game the day after (hopefully) the Phils clinch a play-off spot.  I like that there are pinch-runners galore and late inning defensive switches.  To date, the Phils have added only 3 players to bring the total number of names on the line-up card to 28*, but I suspect that number will expand.
25 years ago, I don't think I was aware of this rule yet.  I had become very familiar with the Phillies' 25 players and then all of the sudden, extra names started showing up in the boxscores.  (The list I created in pencil lists 27 players, so I'm assuming a couple of those guys were on the DL at the time.)  It was only after I dutifully wrote out each players' number and name, underlining each player for some reason, that I had to come back and write out the numbers and names of the "New Players" in pen.
None of these guys had a huge impact on the '85 Phillies, and only Steve Jeltz received a proper Topps card, appearing in that year's traded series.  The other cards featured here are cards I've created to fill the gaps and to satisfy my inner 11-year-old who never had a proper Rocky Childress Phillies' card.  Fred Toliver picked up his first and only Major League save on September 3rd.  Alan Knicely was used as a pinch-hitter throughout September, going 0 for 7 with 4 strikeouts.  Rich Surhoff, B.J.'s older brother, pitched in only 2 games before getting shipped to the Texas Rangers in exchange for Dave "Smoke" Stewart.   Childress appeared in 16 games for the '85 Phils, compiling a 6.21 ERA.  And then there's Steve Jeltz.  Jeltz spent parts of 7 seasons with the Phils, compiling a .213 average.