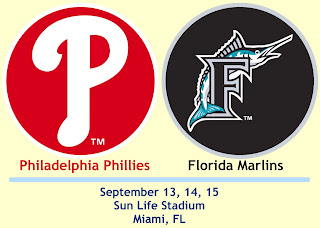 Short-Timers:  When the Phillies unceremoniously released lefty reliever Nate Robertson last week, I started thinking about other former Phillies with extremely short tenures.  Robertson started the season with the Marlins, but he was released at the end of July.  He pitched for a few weeks in August for the Cardinals' AAA club in Memphis before requesting his release there.  The Phils picked him up on August 24th and he pitched in 2 games for the AAA IronPigs before finding himself wearing #31 for the Phillies upon his recall on September 6th.  Robertson was on the team's active roster for all of 4 days, appearing in 2 games and running up an impressive 54.00 ERA in an inning of work.  That's 6 earned runs in 1 inning.  He was released on September 9th.

So who else had been a Phillie for a week or less in recent memory?  My brain almost immediately thought of Adam Bernero (scary, isn't it?) who started one lone game for the Phils back on June 30, 2006.  He lasted just 2 innings, allowing 8 runs on 7 hits, including 3 home runs to the Blue Jays.  A few days later, he was designated for assignment and eventually released.