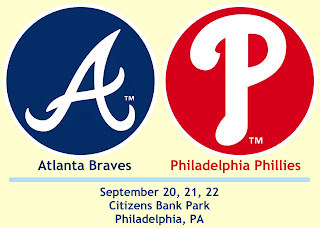 ﻿﻿Records: Braves 86-64, 2nd Place in NL East (3 games behind the Phillies); Phillies 89-61, 1st Place in NL East (3 games ahead of the Braves)﻿﻿
﻿﻿﻿﻿﻿This is a ginormously huge series.  Its importance is monumental.  This is big, folks.  The Phillies currently hold a 3-game lead over the Atlanta Braves in the NL East with 12 games to play.  The Braves, who spent the entire summer in first place, have been struggling of late, but they're coming off a 3-game sweep of the more craptastic than usual Mets.  The Phillies have steamrolled through the past 6 weeks, overcoming what was a 7-game deficit on July 22nd.

Todd Zolecki summed up the stakes nicely:  "If [the Phillies] win two of three against Atlanta, they will have a four-game lead with just nine games to play. Even if the Phillies would finish 4-5, the Braves would have to finish 8-1 just to tie."  And if the Phils should sweep . . . the mind boggles.
Braves Probables: Jair Jurrjens, Mike Minor, Tommy Hanson
Phillies Probables: Cole Hamels, Roy Halladay, Roy Oswalt
Posted by Jim at 12:00 PM

I'm actually a little nervous about these upcoming games with ATL. Really hoping for a sweep. Go Phils!

I'm a little nervous about the guy making his debut tonight against the Phils. They typically don't fare well against guys they've never seen before.