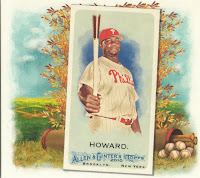 On a gorgeous night for baseball, the Phils stayed one step ahead of the Braves, winning 5-2 against the Nationals and cutting their Magic Number to clinch the NL East to 11.  Before we had even reached our seats, Phillies' starter Kyle Kendrick had allowed the first Nationals' run when Danny Espinosa led off the game with a single and came around to score on a Ian Desmond triple.  After that, however, Kendrick settled in, facing the minimum in the 2nd through 5th innings.  He surrendered just one more run in the 6th before his night was over.

The Phillies scored their runs via the long ball and a Wilson Valdez double.  Jayson Werth led off the 2nd with his 23rd home run of the year, and Valdez later doubled home Raul Ibañez.  Ryan Howard hit a 2-run shot in the 3rd, his 30th of the year and Ibañez followed that a few batters later with a solo home run, his 15th of the season.

After Kendrick departed, the bullpen did their job as Chad Durbin, Ryan Madson and Brad Lidge threw scoreless frames in the 7th, 8th and 9th innings.  Madson worked his way into and out of trouble, loading the bases in the 8th but escaping unscathed.  Lidge needed just 8 pitches to secure Kendrick's 10th victory of the season.  The Phils go for the series sweep tomorrow afternoon behind Joe Blanton.

Other Stuff:  Howard's home run was the 252nd in his career, moving him past Pat Burrell for sole possession of third on the Phillies' all-time list.  It also marked Howard's fifth consecutive 30-home run, 100-RBI season, setting a franchise record and besting Chuck Klein's streak of four consecutive seasons reaching those plateaus.  Since being swept by the Astros in late August, the Phillies have compiled a record of 18-4.  The Class A Lakewood BlueClaws, managed by former Phillie Mark Parent, won their second consecutive South Atlantic League Championship tonight.  Congrats BlueClaws!
Posted by Jim at 11:23 PM

Email ThisBlogThis!Share to TwitterShare to FacebookShare to Pinterest
Labels: 2010, Howard