1990 Donruss Best NL #69 John Kruk
When the Phillies pulled off their unbelievable, improbable, amazing come-from-behind victory on Thursday night (after we had opted to leave the game early), I couldn't help but think back to August 21, 1990, to another amazing comeback. 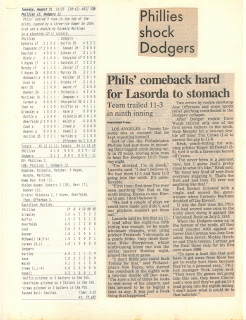 Almost 20 years ago, with the Dodgers taking an 11-1 lead into the 8th inning, it seemed inevitable that the Phils were headed towards defeat.  Phillies' starter Jason Grimsley had been touched for 3 runs in his abbreviated 3-inning outing.  Relievers Bruce Ruffin and Darrel Akerfelds didn't fare much better, allowing the Dodgers to score 8 times in the 5th, aided by a key error from third baseman Charlie Hayes.
As the article points out, the nine 9th innings runs were the most by the Phillies since July 5, 1918.  The major blows in the inning came courtesy of Dale Murphy's 2-run double (11-8, Dodgers), John Kruk's 3-run home run (11-all) and Carmelo Martinez' go-ahead double off Jay Howell (12-11, Phillies).
The Dodgers finished 5 games back in the NL West behind the Reds in 1990, going 23-17 the rest of the year following this demoralizing loss courtesy of the mediocre, but at times exciting, '90 Phillies.
Posted by Jim at 8:00 PM