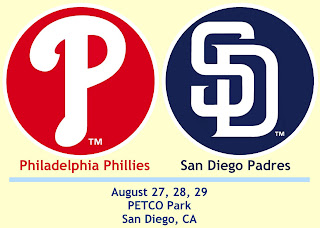 Records: Phillies 70-57, 2nd Place in NL East (3 games behind the Braves); Padres 76-49, 1st Place in NL West (6 games ahead of the Giants).  The Phils are now a half game behind the Giants in the NL Wild Card standings.


I'm going to be optimistic.  There are 35 games left on the Phillies' schedule for 2010, and they have 35 games to clinch one of two readily available play-off berths.  Coming off a 4-game sweep to the Astros, and on the heels of yet another multi-week offensive outage, it's easy to be down on this team and write them off.  But the one thing the Phillies have taught me since 2007 is that it's not over until the little "x" appears next to your team's name in the standings.  At the 127-game mark over the past 3 seasons, here's where the Phillies stood and where they ended up:
2007 - 66-61, 6 games behind the Mets in the NL East, won the NL East by 1 game over the Mets
2008 - 68-59, 2½ games behind the Mets, won the World Series
2009 - 74-53, 7 games ahead of the Braves, won the NL Championship


Now I'd gladly trade places with where we were this time last year, but given that 16 of our players have been disabled this year and that most of the team appears to be playing hurt at this point, 3 games back with 35 to go isn't too shabby.  Are the Braves that good?  Are the Phillies this mediocre?  We'll find out over the next month-plus of games.  The schedule favors the Phils - After a West Coast swing with the Padres (3 games), Dodgers (3 games) and Rockies (1 make-up game), and a 3-game series with the Brewers at home, the team's remaining 25 games are against other NL East teams.  Most importantly, 6 of their final 12 games are against the Braves.
The offense is the key.  Jimmy Rollins, Chase Utley and Ryan Howard have got to get going - it's just that simple.  The starting pitching has been superb and the bullpen has held their own, but the big boppers have to start putting it together and putting it together now.  Let's go Phils!

Yes! It's time for optimism! Let me add that they have to start falling asleep on the basepaths. There was nothing wrong with the pitching during the Houston series (except for Kendrick's 1st 3 innings)

If the Red Sox are still in it, so are the Phils!