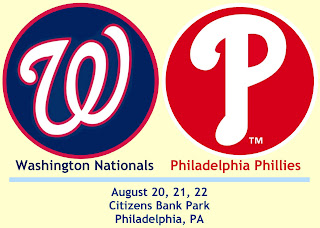 
Meanwhile, in Lakewood:  Ryan Howard will play in a rehab game tonight for the Low A Lakewood BlueClaws.  Prior to the game, Howard will take part in a pre-game ceremony to retire the #29 he wore as member of the BlueClaws back in 2002.  (The ceremony was scheduled for later in the season, but with Howard in town, why not move things up a little?)  In 135 games with the BlueClaws, Howard hit .280 with 19 home runs and 87 RBIs.  He returned for a 2-game rehab assignment in 2007, going 2 for 6 in 2 games with a home run.  His #29 will be the first number retired by the franchise.
Nationals Probables: Jason Marquis, Stephen Strasburg, Scott Olsen
Phillies Probables: Roy Halladay, Kyle Kendrick, Roy Oswalt
Posted by Jim at 12:00 PM