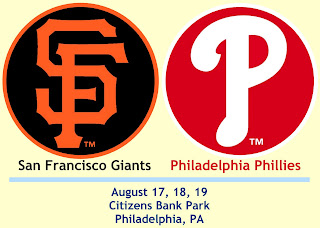 Former Giants with the Phillies: Of everyone currently employed by the Phillies, only Sarge Matthews formerly called San Francisco home, patrolling the outfield at Candlestick between 1972 and 1976. Current IronPigs Brian Bocock (2008) and Cody Ransom (2001-2004) also spent time with the Giants.

Of course, two-thirds of the Giants' starting outfield are former Phillies with Pat Burrell in left and Aaron Roward in center. I have a funny feeling that Burrell would like nothing more than to severely hurt his former team, especially since the Phils and Giants are currently neck and neck atop the NL Wild Card standings.

Sarge has put on some weight!

This was his pre-simple hat phase.