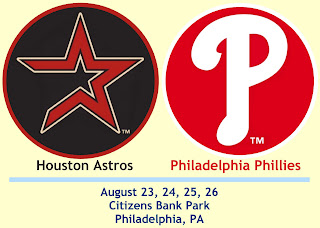 
Just Gross:  It's Alumni Weekend Part II as Ed Wade brings his Phillies' West team to Citizens Bank Park for a 4-game series.  The Astros recently lost a former Phillie with the trade of Pedro Feliz to the division rival Cardinals, but manager Brad Mills will make do with the 5 former Phils on his roster, including 2 of his 4 starting pitchers this week.  (The other 3 are Nelson Figueroa, Michael Bourn and Jason Michaels.)
New Phillies' hitting coach Greg Gross started and finished his career with the Astros.  He was drafted by the team in the 4th round of the 1970 amateur draft, making his Major League debut 3 years later on September 5, 1973.  Following the 1976 season, and having spent the previous 3 seasons as either the Astros' starting right or left fielder, Gross was shipped to the Cubs.  For the bulk of his career, he served as the Phils' primary left-handed bat off the bench, enjoying a decade with the team (1979-1988) before making his way back to the Astros for the 1989 season - the final season in his 17-year playing career.