The Phillies are now 2-0 in games I've attended and kept score.  Coincidence?  I think not. 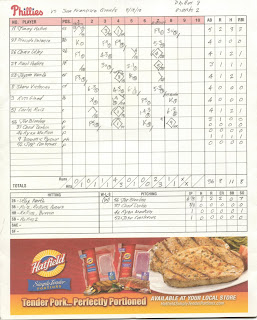 They made it look easy again, increasing their lead in the Wild Card race to 2 games over the Giants, while keeping pace with the NL East leading Braves, who also won tonight.  Jimmy Rollins fell a double short of the cycle and his 4th inning 3-run home run was the blow that sealed the victory for the Phils.  Chase Utley, Jayson Werth and Carlos Ruiz all contributed multi-hit efforts.  And when was the last time the Phils had 3 triples in one game?  Rollins, Ruiz and Raul Ibañez all connected for three-baggers.  The icing on the cake was Domonic Brown's second-deck bomb of a pinch-hit home run in the 8th inning.
Phillies' starter Joe Blanton's 1st inning woes continued as he surrendered an Andres Torres solo home on his 6th pitch of the ballgame.  He settled down after that, and at one point he had retired 14 of 15 batters from the 2nd through the 6th innings before Pat Burrell's solo home run ruined the streak.  Blanton turned the game over to the bullpen with an out in the 6th.  Chad Durbin, Ryan Madson and Jose Contreras were perfect the rest of the way as the Giants folded easily.  The Phils go for the series sweep tomorrow night behind Cole Hamels, who has to hope the Phils saved a few extra runs for his outing.
And the scorecard shows how it happened.*  The scorecard also makes me hungry for tender pork, perfectly portioned.

* Phrase used without the express written consent of Section 36 and its affiliates.
Posted by Jim at 11:29 PM

Email ThisBlogThis!Share to TwitterShare to FacebookShare to Pinterest
Labels: 1961, 2010, Rollins

That's a good lookin scorecard. I suggest you make sure to go down and keep score when the Braves are in town next month!!