We attended the Pirates-Mets game on Saturday night, and it was by far the best minor league baseball game I've seen all season.  (I kid, I kid!)  The Pirates-Mets game was delayed at its outset by rain, and before we had time to dry off our seats, the out of town scoreboard showed the Nationals had the bases loaded in the first inning in Philly.  I looked up again a few minutes later to see the top of the 1st had ended, but the scoreboard now read "WSH 3, PHI 0."  This Phillies game will be remembered more for the potentially devastating injury to pitching phenom Stephen Strasburg than it will be for the lousy pitching performance from Bad Kyle Kendrick.  Strasburg was forced from the game in the 5th after wincing and grabbing his right elbow following a pitch to Raul Ibañez.  Kendrick just never got it together, and the Phils phoned in a loss to the Nationals. 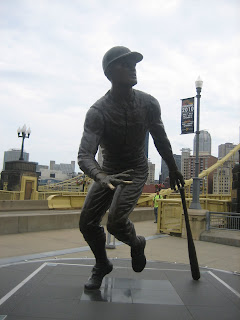 Meanwhile, in Pittsburgh:  It was Heritage Day at PNC Park as the Pirates wore the Negro League uniforms of the Pittsburgh Crawfords, while the Mets donned the uniforms of the New York Cubans.  This confused my son Doug a little, since I had told him we'd be rooting for the Pirates - the team with the black hats.  The Crawfords' hats are a bright red so Doug understandably thought I was pulling a fast one on him.  Unfortunately, the bad guys beat John Russell's Pirates and everyone got a little soggy in the process.  The game was called after 6 innings due to rain.
I love PNC Park.  From the walk over the Roberto Clemente bridge to the cool little bars and delis on the outskirts of the stadium, to the statues of Clemente and Willie Stargell outside the park - it's a great ballpark experience.  Overall, it's a friendly atmosphere inside the ballpark too.  Pirates' fans seem to be by nature a reserved sort, as they haven't really had anything to cheer for since the early '90s.  The loudest fans in the ballpark were the ones wearing the blue and black of the Mets.  My one complaint?  There wasn't one single Kent Tekulve souvenir in the entire Pirates' gift shop.
Posted by Jim at 9:00 PM

Email ThisBlogThis!Share to TwitterShare to FacebookShare to Pinterest
Labels: 1981, Tekulve