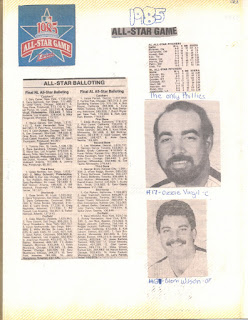 In his first All-Star Game appearance, catcher Ozzie Virgil was one of the stars of the game for the National League. In the top of the 5th inning, Virgil singled off Bert Blyleven to score Darryl Strawberry and Tim Wallach, giving the NL a 4-1 lead. The NL would go on to win, 6-1. Virgil would make the NL squad again in 1987, this time as a member of the Braves.
In 1985, the NL was at the tail-end of their dominance in the All-Star Game. Beginning in 1986, the American League would win (or tie) 20 of the next 25 games.
Outfielder Glenn Wilson was also named to the NL team, replacing an injured Pedro Guerrero on the roster. However, he never made it into the game, seriously bumming out my younger self.
Posted by Jim at 12:00 PM