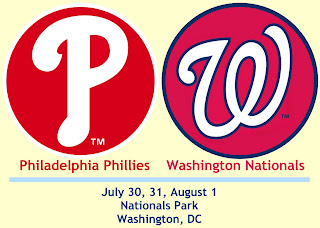 Roy Halladay and yesterday, Roy Oswalt. He's sported some ugly sweaters along the way, but the guy is getting the job done and he's ensuring the 25 players on the field are the best possible guys out there. Meanwhile, in Houston, everything I've read on-line suggests that Ruben and the Phils basically fleeced Ed Wade with this trade, stealing Oswalt for a decent, but unproven pitcher in J.A. Happ and two lower-level 19-year-old prospects. Only time will tell which team will come out ahead with this deal, but you can't help but like the three-headed monster of Halladay-Oswalt-Hamels at the top of the rotation for the rest of this year and, best of all, for all of 2011.
Phillies Probables: Roy Oswalt, Joe Blanton, Cole Hamels
Nationals Probables: Craig Stammen, Ross Detwiler, TBD
Posted by Jim at 12:00 PM