I'm writing this on Saturday morning as the Phillies find themselves in third place in the NL East, looking up at the Braves and the Mets. It hasn't been enjoyable for the team or their fan base for just about a month now. Following a dominating performance against the Pirates back on May 17th in which they won, 12-2, things have completely fallen apart. On May 17th, the Phillies were 5 games up in the NL East, 11 games above .500. On the morning of June 12th, the Phillies are 2½ games behind the NL East leading Braves, 3 games above .500. ESPN's Phillies page points out the team is now 19th (out of 30) in the league in hitting and RBIs, and they're 23rd in the league in hits. 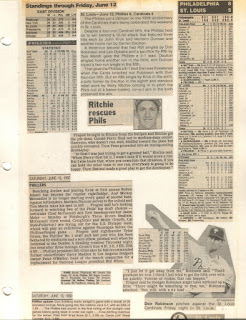 Going into the season, the major concerns were the bullpen (which has been fine) and the starting pitching after Roy Halladay (which has also been fine). No one could have predicted the team's mid-May to mid-June downfall would be a result of a horribly struggling offense. To paraphrase the old saying, "I guess that's why they play the games."
So how does this all relate to 1992? Back on June 12, 1992, the Phillies were 27-30, 4 games behind the NL East leading Pirates. The biggest difference between the '92 Phillies and the '10 Phillies is the expectations that came with both teams. The '92 Phillies were expected to be bad. You'd often hear the phrase, "We just want to be competitive," when club leaders spoke of that team. Conversely, the '10 Phillies were all but expected to walk away with their fourth NL East pennant and waltz into the World Series this year. For that reason, watching the last month of Phillies baseball is much, much more difficult than what we had to endure back in 1992.
At least in 1992 we knew what we were getting ourselves into.
Posted by Jim at 12:00 PM