My Dad and I have seen a lot of ballgames together, but perhaps one of our favorite games came during an otherwise forgettable 1991 season. On a whim, we decided to go see the Phillies play the Expos on a Monday night in August. What made the game special, other than the 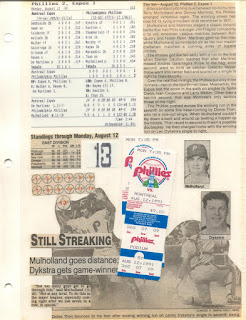 spontaneity of our attendance, was the fact the Phils were going for their 13th win in a row. This was a mediocre Phillies club, so a lot of luck had gone into the team's first 12 wins in the streak.
We drove to the Vet, stood in line and got two seats in left-center field in Section 360. This was probably the first ballgame I can clearly remember hanging on every pitch, every out, every play. My Dad and I still talk about how great a ballgame it was. Terry Mulholland out dueled Dennis Martinez and the Phils won, 2-1. Dickie Thon scored the winning run, scoring in the 6th on a Lenny Dykstra single.
The streak was over the next night as the Phils lost to the Pirates, but the memory of that thrilling game #13 in the streak of '91 will forever stick in my mind. Thanks again, Dad.
And last year's Father's Day post bears repeating.
Posted by Jim at 7:00 AM

Hey I was at that game - It was the first game I went to after moving to the Philadelphia area.

I will have to dig thru my tix stubs, I think I may have been near that section.

it was a great game with a playoff type atmosphere, the crowd was really into it for a team that had not done much all year (or in years).

Very cool that you were there too!

I remember being in awe of how exciting the Vet was that night.