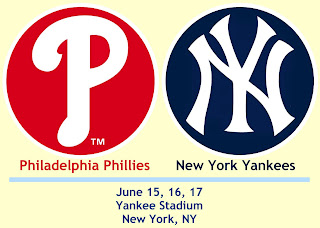 Former Yankees with the Phillies: Jose Contreras (2003-2004) started his U.S. baseball career in the Yankees' organization. He pitched in 36 games, going 15-7 with a 4.64 ERA before a July 2004 trade sent him to the White Sox for Esteban Loaiza. Dallas Green, now a senior advisor to the GM, managed the Yankees for 121 games in 1989, compiling a record of 56-65. He was fired by George Steinbrenner in August with his team in 6th Place, 7½ games behind the 1st Place Orioles. While researching the reason for his firing, I found an interesting article from early August 1989 which quotes Green's opinion of Steinbrenner's baseball knowledge: "I've known a lot of owners who can talk the lingo (of baseball)," he said. "Once in a while, you have to sit down and talk logical baseball sense, common sense. That doesn't happen much here." He was fired 11 days after that quote appeared in the papers, and replaced by Bucky Dent.

Previously . . . On Lost: The last time the Phillies played in Yankee Stadium, we were in Disney World as Doug and I battled mild cases of swine flu. We recovered nicely, but the Phillies lost the World Series to the bad guys. I'm hoping the Phils' visit to the Bronx is less eventful for us than their last visit. And a few wins would be nice, too.