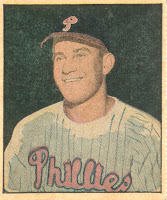 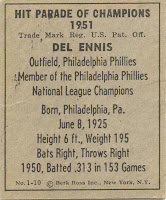 The Phillies were rained out tonight, which is strange given that it hasn't really rained in our area since around 6:30. In any event, the rare night off gives me an opportunity to reach back into the vintage pile and feature a baseball card from yesteryear.

I recently added this Del Ennis card to my collection for a reasonable Buy It Now price on eBay. I was drawn to the card as Ennis was one of my Dad's favorite players, and because I wasn't familiar with the 1951 Berk Ross baseball card set before stumbling upon it on eBay. According to the handy-dandy Standard Catalog of Baseball Cards, the 1951 Berk Ross set, or the "Hit Parade of Champions" set, featured 72 athletes from various sports. (40 of the athletes featured are baseball players.) The cards were issued in two-card panels, and there's a perforation along the right side of this Ennis card where some young lad (or lass) carefully tore off the card's partner close to 60 years ago.
I found a little more information on the set here, which reveals the set was released in 4 series of 18 cards each, with the first 10 cards of each series featuring baseball players. This Ennis card is the 10th card from the 1st series, thus its number designation of "1-10".
Of the 40 baseball players featured, 14 of them are Phillies. The reason for the high number of Phillies in the set is most likely due to their recent NL Championship in 1950. Berk Ross released just one more set in 1952 before exiting the trading card business.
Posted by Jim at 11:19 PM

Email ThisBlogThis!Share to TwitterShare to FacebookShare to Pinterest
Labels: 1951, Ennis

wow a berk ross card!! - I still have not added any of these to the Phungo collection.

I got lucky. I find I have my most success on eBay when I'm not actually looking for something specific.

Ennis, one of my favorites...a berk ross card adds to its value