Pirates at Phillies: May 17th through May 18th 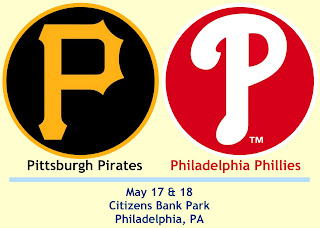 Records: Pirates 16-21, 3rd Place in NL Central (5 games behind the Reds); Phillies 23-13, 1st Place in NL East (4 games ahead of the Marlins and Nationals)
Former Pirates with the Phillies: Why does it seem as if these things always start off with Nelson Figueroa? Figueroa pitched in parts of two seasons with the Pirates in 2003 and 2004. Bench coach Pete Mackanin served in that same role with the Pirates from 2003 until 2005. He was named the team's interim manager on September 6, 2005, replacing the fired Lloyd McClendon. Mackanin guided the team to a 12-14 record to finish the 2005 season, and he was not asked back in 2006. (Jim Tracy took over as Pirates' manager in 2006.)

1981 Topps #695 Kent Tekulve
Do you have a player on an opposing team who is one of your absolute favorite players? Are you a die-hard fan of Team A, but you just love rooting for a guy on Team B? Such was the case with my fandom of one Kenton Charles Tekulve back in the early '80s. The guy's baseball cards just looked so cool, and I loved seeing highlights of him pitching on This Week in Baseball. I made it a point to collect his cards when I was growing up, although I'd keep his cards far from my Phillies binder. His 5 x 7 Topps Super card from 1981 hung on my bulletin board, sharing space with Mike Schmidt, Tug McGraw and Bob Boone. So imagine how thrilled I was when the Phillies actually acquired Teke in a trade with the Pirates back in April 1985. Teke pitched with the Phils from 1985 until the team released him following the 1988 season. After his playing days, Teke came back briefly as a color commentator on the Phillies' cable broadcasts.
Pirates Probables: Charlie Morton, Zach Duke
Phillies Probables: Kyle Kendrick, Roy Halladay
Posted by Jim at 12:00 PM