Cubs at Phillies: May 19th through May 20th 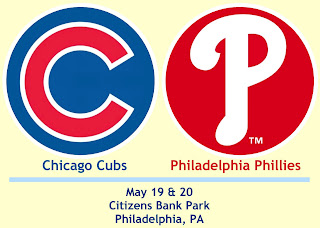 Records: Cubs 18-22, 3rd Place in NL Central (5½ games behind the Reds); Phillies 24-14, 1st Place in NL East (4 games ahead of the Marlins)
Former Cubs with the Phillies: Ross Gload made his Major League debut with the Cubs back in 2000, appearing in 18 games and hitting just .194. First base coach Davey Lopes played in parts of 3 seasons with the Cubs from 1984 until 1986. He was a teammate of current TV broadcaster Gary Matthews, who patrolled the Wrigley Field outfield between 1984 and 1987. (Sarge also served as the Cubs' hitting coach from 2003 until 2006.) While Davey and Sarge were winding down their careers, rookie Jamie Moyer was just getting started. He pitched in 85 games with the Cubs to start his career between 1986 and 1988. The man who was calling the shots for the Cubs in the early '80s was Dallas Green - the team's general manager and later their club president from 1982 until 1987.

1988 O-Pee-Chee #183 Bob Dernier
Bobby D.: I was a set collector first and I eventually evolved into a team collector. I've never been much of a player collector, except for when it comes to my favorite all-time baseball player - Bob Dernier. There are still some oddball baseball cards of his I'm trying to track down, so please check out my wantlist and let me know if you'd like to work out a trade to bring these baseball cards to a good home.
Cubs Probables: Tom Gorzelanny, Ryan Dempster
Phillies Probables: Jamie Moyer, Joe Blanton
Posted by Jim at 12:00 PM