Having been born in October, there isn't much opportunity for me to look back through the years and study the boxscores of games the Phillies played on my birthday. For my son Ben, 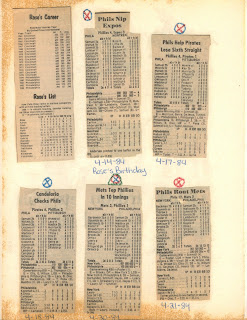 now 4 days old, he'll be able to one day spend hours (if he so desires) browsing through the games the Phillies played on his birthday - April 21st.

For example, back in 1984, 26 years before he was born, the Phillies were busy scoring 12 runs in a winning effort against the Mets. John Denny pitched a complete game for the win, striking out 7 in the process. The big offensive blow was Glenn Wilson's 3-run home run in the 5th. With the win, manager Paul Owens' club was 8-5 on the season and just a half game back from the first place Mets. (The Phillies would finish the '84 season with a .500 record, in 4th place.)

Unlike today, when home sell-outs are the norm, Veterans Stadium was a little more than a third full for this game. Also unlike today, all the boxscores featured on this page show the time of game at less than 3 hours.
Posted by Jim at 12:00 PM