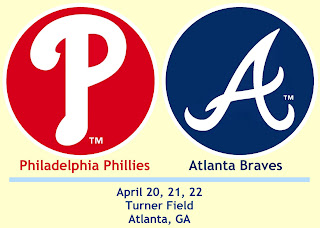 Former Braves with the Phillies: Reliever Danys Baez pitched briefly with the Braves in 2006. Hitting coach Milt Thompson began his career with the Braves (1984-1985) before being traded to the Phillies with Steve Bedrosian for Pete Smith and Ozzie Virgil in December 1985. TV broadcaster Gary "Sarge" Matthews played for the Braves from 1977 until 1980. Finally, assistant general manager Charlie Kerfeld wrapped up his career with Atlanta in 1990.