Mets at Phillies: April 30th through May 2nd 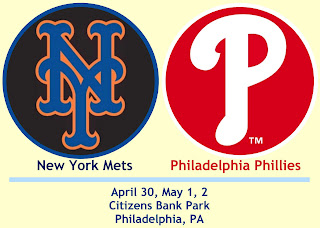 Records: Mets 13-9, 1st Place in NL East (½ game ahead of the Phillies); Phillies 12-9, 2nd Place in NL East (½ game behind the Mets)
Former Mets with the Phillies: There is a disturbing presence of too many ex-Mets within the Phillies' ranks. Nelson Figueroa (2008-2009, Brian Schneider (2008-2009) and Wilson Valdez (2009) have all spent time recently donning the enemy's colors. Third base coach Sam Perlozzo held that same job with the Mets from 1987 until 1989. Dallas Green, Senior Advisor to the General Manager, pitched with the Mets in 1966, and managed the Mets from 1993 until his dismissal in 1996.

Power Surge: On June 11, 1985, the Phils pounded out 26 runs on 27 runs against the Mets. Wouldn't it be great to see that kind of offense again? Maybe this weekend? Von Hayes became the first player in Major League history to hit two home runs in the 1st inning. Rick Schu had 4 hits, Juan Samuel had 5 hits, Bo Diaz had 3 doubles, and that's just scratching the surface of the offensive explosion. (Our newborn Ben has had a few offensive explosions of his own over the past few days, but that's another story.) I'll have more from this historic game in a Sunday afternoon post.
Mets Probables: Jon Niese, Mike Pelfrey, Johan Santana
Phillies Probables: Kyle Kendrick, Roy Halladay, Jamie Moyer
Posted by Jim at 12:00 PM