I'm still home enjoying paternity leave, so I was fortunate enough to watch this nail-biter of a game. Throughout the game, the baseball card to be featured in my game summary post, which you're now reading, changed frequently.

Through the first 4 innings - Cole Hamels: Hamels pitched well to start the game, shutting down the Giants until the 5th inning. He had been spotted a 1-0 lead thanks to Ryan Howard's 3rd career home run off Giants' starter Tim Lincecum.

Through the first 8 innings - TBD: I was undecided about which baseball card to feature at this point, given the Giants 4-1 lead and their pending sweep of the Phils. I think I was leaning towards a Kent Tekulve card, just to brighten my mood.

Bottom of the 9th - Jayson Werth: Wow! Werth's bases-clearing double to right was thisclose to being a foul ball, but it hit the chalk and the Phils somehow managed to tie the game. Giants' closer Brian Wilson had not allowed a run up to this point in the 2010 season. (A hearty thank you to Giants' manager Bruch Bochy for removing Lincecum from the game in the 9th.)

Bottom of the 10th - Kent Tekulve: Now I definitely needed a Tek baseball card to brighten my mood. The Phils had pushed across a run in the top of the 10th, but Ryan Madson blew his 2nd save of the year when he allowed the Giants 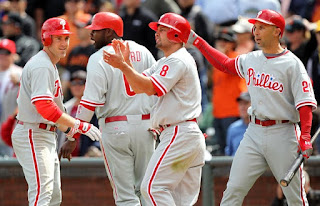 to tie it back up in the bottom of the inning.

Nelson Figueroa surrendered a run in the bottom of the 11th before recording his first career save. The Phils will enjoy an off day at home today before starting a 3-game set with the Mets tomorrow night.

Good golly, it's about time they won one. The Giants are not that good!