24 years later, I'd like to answer the questions posed in the "Spring Training Questions" featured in the column to the right. Please click the page to enlarge and follow along: 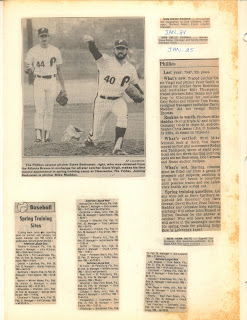 1. He'd be released on June 24th, but Lefty would win 15 more games in 1986 and 1987: 4 with the Phillies, 1 with the Giants, 4 with the White Sox, 5 with the Indians and 1 with the Twins. He was released by the Twins in April 1988 and after receiving no other offers, he hung 'em up.
2. No, no, no, no and No. Only Fred Toliver and Mike Maddux started games for the Phils in 1986, going a combined 3-9 in 21 games started. Dave Stewart was released at the beginning of May, signing a few weeks later with the Oakland Athletics. For the next 9 seasons, he dominated the American League while with the A's and Blue Jays. He started 2 games against the Phillies in the 1993 World Series. Arturo Gonzalez never pitched with the Phillies.
3. John Russell was the team's primary catcher in 1986, hitting .241 with 13 home runs and 60 RBI. Darren Daulton and Ronn Reynolds split time as his back-up. The Phils would make a big splash by signing free-agent catcher Lance Parrish prior to the 1987 season, guaranteeing catching stability for years to come. (Or so we hoped.)
4. No one left and no help arrived. They were doomed from the start.
5. Joe Lefebvre's knee was not good. After missing all of 1985, Joe played 14 games in April and May before announcing his retirement in June.
Posted by Jim at 12:00 PM

Jim, in #2 you sound like Cleveland Brown (in Family Guy) when he slides out of his crumbling 2nd-floor bathroom while in the bathtub!

Any Cleveland reference was purely coincidental!

It's just not the same without Harry. I knew this first Spring would be tough.