Opening Day 2003 was to be the last Phillies home opener hosted at beautiful Veterans Stadium. To mark the occasion, and to pay tribute to years gone by at the Vet, both the Phillies and the visiting Pirates wore vintage '70s-style uniforms. The Phils donned their maroon pinstripes and the Pirates for some reason agreed to wear their all-mustard yellow combination uniforms from the early '70s.

Jenna, our friends Tom and Kris and me were among the 59,269 in the paid attendance that afternoon. The game time temperature was 46 degrees, it was windy and there was a steady drizzle falling. In short, it was gross outside. Pitcher Joe Roa was given the starting nod for the Phils, as he had won the 4th starter's job out of Spring Training. (Kevin Millwood, Randy Wolf and Vicente Padilla had previously started the first three games of the season down in Miami, and Brandon Duckworth started the year on the DL.) Roa was coming off an amazing season with the AAA Scranton/Wilkes-Barre Red Barons, where his 14-0 record and 1.86 ERA earned him International League MVP honors.
Before we even had a chance to dry off our seats, and shortly after the huge American flag was removed from the outfield following the National Anthem, Joe Roa imploded. He retired the Pirates' lead-off hitter Kenny Lofton on a fly ball to Bobby Abreu. After that first out - Jason Kendell singled, Brian Giles singled, Aramis Ramirez walked, Randall Simon singled, scoring 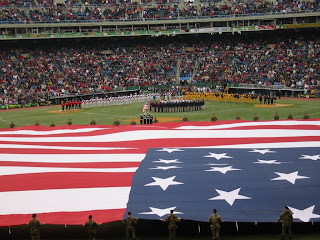 Kendell and then Reggie Sanders drilled a line drive grand slam home run - and it was 5-0 Pirates.
Inexplicably, we stayed until the bitter end, as I was convinced the Phils would mount an improbable comeback. (Tom and Kris politely exited around the 5th inning.) The Phillies ended up ultimately losing the game, 9-1.

Roa hung on with the Phillies until the end of May when he was designated for assignment and opted for free agency. Over the next year, he bounced from the Brewers to the Rockies to the Padres to the Twins, pitching in 48 games for the 2004 AL Central Champs. It appears as if he spent 2005 battling an injury and he was released from the Pirates' camp at the beginning of Spring Training 2006.
Posted by Jim at 3:00 PM

Email ThisBlogThis!Share to TwitterShare to FacebookShare to Pinterest
Labels: 2003, Roa

I was there that day too - mercifully I have somehow totally erased Sanders Grand Slam from My memory.