Section 36 recently asked a question about my checklisting procedures for my Phillies baseball card collection. I thought I'd take a moment to expand upon the method to my madness.

Back in the day, it was fairly easy to accumulate all the baseball cards from your team for a given year. Once you had the Topps, Fleer and Donruss Phillies cards, and you sprinkled in a few Drake's, Kellogg's or Topps specialty cards, you pretty much had a full run of every single Phillies card issued that year. To collect every single Phillies card from the early-90's onward is practically impossible. The advent of parallels, one of ones, cut signatures, super short prints, etc., has made the once easy task of the team collector a daunting proposition. So we have to set our limits.
Reason #171 why my wife Jenna rocks is that she knows exactly what I mean when I sometimes say, "I need to work on my lists." She knows this means a dozen or so baseball card sets have been released in the past few months and I haven't yet updated my Phillies baseball card checklists. I'll start to get itchy when my lists fall too out of date. I compile my lists in Word documents, these days relying mainly on the Beckett on-line price guide. (The prices are bollocks, but the underlying data is extremely useful.) I've posted the first page of my 2009 Phillies list as an example. I omit parallels, one of ones, cut signatures, and anything that doesn't interest me in the least - quad cut cards featuring Chase Utley and three other random players, as an example. I've created these Phillies checklists for every year from 1950 through 2010. (My 2010 checklist is in need of an update with the recent release of 2010 Topps Heritage. Jenna - I need to work on my lists.) 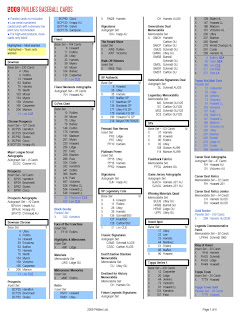 I collect cards of players who played with the Phillies in a given year, even if their baseball card features them on a different team. For that reason, you'll see I've added Cliff Lee's Indians cards to last year's checklist. Finally, I go through the list and determine the cards I'd like to add to my collection. These cards get highlighted in blue. I don't have an unlimited pool of resources to dedicate to the pursuit of every Ryan Howard relic card. However, it's not unreasonable to chase every Ryan Howard base card from 2009.
Finally, I'm constantly adding and revising my lists. Chances are some astute reader may notice I've omitted a Jimmy Rollins insert card from my 2009 SPx checklist, or that I've completely neglected some little known SP Something or Other set from the list.
I mentioned before that sometimes putting together these checklists can be more enjoyable for me than actually tracking down the cards. It may sound hokey, but I think this has deep philosophical roots - the journey is what matters, not necessarily the destination. In summary, my process of compiling baseball card checklists equates to a well-balanced, zen-like existence. (And it's fun.)
Posted by Jim at 8:00 AM

Email ThisBlogThis!Share to TwitterShare to FacebookShare to Pinterest
Labels: 2009, Utley

Thanks for the tips!

Did you use Excel for this format? If not, what did you use. I like the format. thanks

Thanks NYBBNUT! It's just a Word document divided into 5 columns. I find it's easier than Excel as I can easily add sets and cards throughout the year.