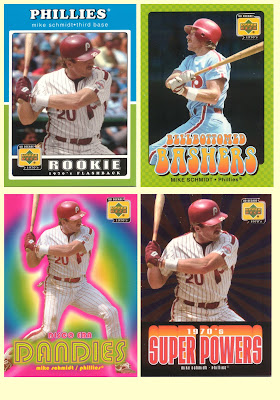 It's no secret I'm a huge fan of the 1975 Topps set. It was the first set my Dad and I collected together, and it's super groovy. So when the 2001 Upper Deck Decade 1970's set was released nine years ago, I was excited to collect the set. The design loosely mirrored the bright, multi-colored design of the '75 Topps set and it featured stars of the '70s. Excitement about the set quickly turned to disappointment once I actually added several Phillies cards from the set to my collection. Player selection was decent - the Phillies team set consists of Garry Maddox, Mike Schmidt, Greg Luzinski and Tug McGraw - all clearly Phillies stars from the '70s.
However, the most disappointing aspect of the cards is that most of the photos used are clearly not actually from the '70s. Another disappointing aspect is the use of the same picture on several different cards. I've featured several Mike Schmidt cards from the set, all featuring pictures taken several years after the Me Decade had ended.
It's hard not to like insert sets with names like Bellbottomed Bashers and Disco Era Dandies, but the cards fall flat when pictures from the mid to late '80s are used instead of actual pictures from the disco era.
Posted by Jim at 6:32 PM

Email ThisBlogThis!Share to TwitterShare to FacebookShare to Pinterest
Labels: 2001, Schmidt

Is this an official declaration? Do you need a list?