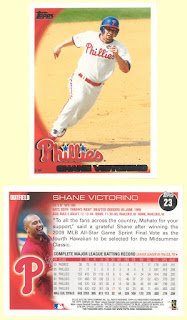 While I was down in the coal mine this week, the Phillies avoided arbitration with Joe Blanton and Shane Victorino, signing both to 3-year deals. The Blanton signing means the Phils now have a core of four starting pitchers locked up through at least the 2012 season - Roy Halladay, Cole Hamels, Blanton and J.A. Happ. On paper, it appears as if the Phillies opted for three years of Blanton and three Mariners prospects in exchange for one more year of Cliff Lee. I still don't care for the Cliff Lee trade, but I'm starting to see the team's reasoning behind the move.

The Victorino signing means two-thirds of the Phillies outfield will remain in tact for 2011, with all indications pointing towards the team allowing Jayson Werth to test free agency following the 2010 season. (Raul Ibañez is locked up through 2011.)
It was also revealed today the Phillies had reached a tentative agreement with pitcher Jose Contreras. The Cuban All-Star has previously pitched with Yankees, White Sox and Rockies, and he's expected to compete for the 5th starter's job out of Spring Training.
They're Here: I opened my first packs of 2010 Topps this afternoon (thank you Target) and my first impression is - I like them. And I think, just maybe, I like them more than any recent Topps base set offering. I'm a fan of colorful baseball card sets, and this one definitely qualifies in that category. The team script logo on the front is a nice touch, although it bugs me that some of the teams list a city while others do not. The backs are nice and clean with easy to read card numbers and career statistics. The set will undoubtedly look nice once it makes it way into 9-pocket pages. I'm still debating whether to collect the set this year, or just wait for the factory set to become available this summer.
Posted by Jim at 10:30 PM

Email ThisBlogThis!Share to TwitterShare to FacebookShare to Pinterest
Labels: 2010, Victorino

Thanks Chachi...I know it was difficult from the coal mine

Thanks for posting, I think this is the first 2010 Phils card I have seen. And thanks for posting the back too. I didn't realize the backphoto was so prominent. And actually a different picture then on the front!

I am starting to warm to this set too.

I always like it when the predominant colors on a baseball card are the team's primary colors. And while I like the use of the team script logos on the front, it could have been toned down a little. Talk about rubbing it in . . .