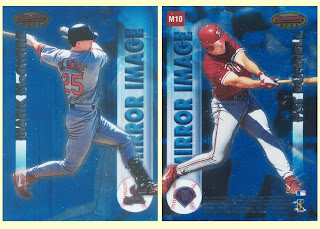 Like most baseball (and sports) fans, I spent the summer of 1998 following the exploits of Mark McGwire and Sammy Sosa as they attempted to break Roger Maris' single-season home run record. It was a thrilling and exciting time for the great game of baseball as the daily power display helped bring back a fan base still largely alienated by the 1994 players' strike. But now we have confirmation that Mark McGwire used steroids during that record breaking year. He cheated.

The new Cardinals' hitting coach released a statement this afternoon admitting his steroid usage and he appeared live tonight on the MLB Network in a confessional interview with Bob Costas. By his own admission, using steroids is the worst mistake he's ever made and it's a mistake with which he now has to live.
I'm not shocked by McGwire's admission but I am a little relieved. I'm not one for controversy or confrontation, and I don't take pleasure in others' suffering, even when they've brought on the suffering by their own actions. I love and respect the game of baseball and I'm glad he's come clean, if for no other reason than it allows us, the fans, to start to move on. How ironic is it that the man once credited with saving baseball now has to plead for forgiveness from the game's fans?
Unfortunately, when McGwire first steps out of the Citizens Bank Park visitors' dugout in early May, he'll hear boos and he'll see derogatory signs. He'll receive the same reception in other ballparks around the country. But I won't boo. I'm saddened and a little angered by his past actions, but I won't kick a guy who's come clean and who seems genuinely sorry for the mistakes he's made.
Posted by Jim at 10:07 PM

Email ThisBlogThis!Share to TwitterShare to FacebookShare to Pinterest
Labels: 1999, Burrell

I'm not saying all is forgiven, as he still has some fences to mend. I'm just saying I won't boo him.

One other thought . . . He needs to use his position in the game and his past mistakes to educate. He needs to stand up and say, "I did this. It was wrong and you shouldn't do it."

He needs to talk to high school teams, minor leaguers, etc., and he needs to talk to the Cardinals players with whom he's now charged. I hope he realizes he's in the position to help deter younger players from going down the same cheating road he went down.

Pitchers and catchers report in a little over a month.

I agree. He has come clean and he never lied about it. Why kick him when he's down?

Reader Devon from My First Cards (the 1982 Topps blog at cards.devonyoung.com), e-mailed me this interesting tidbit, which I hadn't considered: