The Newest Toronto Blue Jays (and an Oakland Athletic) 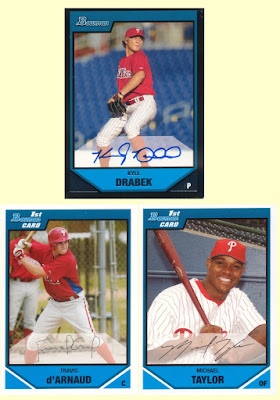 2007 Bowman Prospects #BP111 Kyle Drabek
2007 Bowman Draft Picks #BDPP14 Travis d'Arnaud
2007 Bowman Draft Picks #BDPP37 Michael Taylor
The Phillies Room bids farewell to three more prospects, dealt yesterday to acquire Roy Halladay from the Toronto Blue Jays.
Kyle Drabek was the Phillies 1st round selection in the June 2006 draft. The son of former pitcher Doug Drabek, Kyle split 2009 between Class A Clearwater and AA Reading, going 12-3 with a 3.19 ERA. Recovering from a July 2007 Tommy John surgery, Kyle pitched in just 8 games in 2008 but by all accounts made a full and impressive recovery with his 2009 performance.
We were there for Michael Taylor's AAA debut in July and we witnessed his first AAA home run. The Blue Jays have spun Taylor off to the Athletics, where he should compete for the A's starting left fielder job out of Spring Training. A Stanford graduate, Taylor possesses both power and speed and he's been compared to Jermaine Dye.
I featured catcher Travis d'Arnaud in a post back in September, celebrating the Lakewood BlueClaws' advance to the Sally Championship Series. Known more for his defense than his offense, d'Arnaud was ranked ahead of Lou Marson in terms of catching depth in some scouting reports last year. Marson, of course, was part of the package that netted now Seattle Mariner Cliff Lee from the Indians in July.
Best of luck to all three and I'll be paying a little closer attention this year to the Blue Jays, A's and Mariners.
Posted by Jim at 12:00 PM