New Additions to the 40-Man Roster 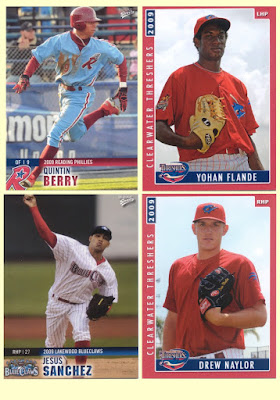 
With the recent flurry of free agent signings (Juan Castro, Brian Schneider, Placido Polanco and Ross Gload - still pending), the Phillies added several established players to their 40-man roster. A few weeks ago, the Phils also added three prospects to their 40-man roster who may have an outside chance of spending some time with the big club in 2010:


Quintin Berry - The speedy 25-year-old Berry was drafted by the Phils in the 5th round of the 2006 draft. He was the starting center fielder for the AA Reading Phillies in 2009, hitting .266 with very little power, but with 48 stolen bases. In 2007, Berry won the Paul Owens Award as the best minor league player in the Phillies organization.


Yohan Flande - Lefty Yohan Flande, 24 in January, went 11-5 between Clearwater and Reading in 2009, striking out 117 and walking 45 in 152.2 innings of work. He pitched an inning in the 2009 Futures Game during the All-Star weekend. Paul Hagen wrote a great piece on Flande for the Philadelphia Daily News back in June.


Jesus Sanchez - Sanchez is the last remaining player obtained in the 2006 Bobby Abreu trade still with the Phillies. Originally a catcher, Sanchez converted to a pitcher last year and started 26 games for the Lakewood BlueClaws. He compiled a record of 10-6, striking out 120 in 136 innings with a 3.44 ERA.