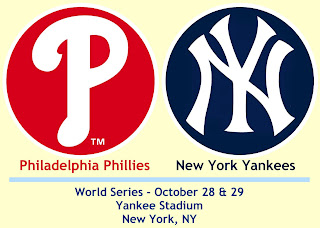 It's On: The 105th World Series starts tonight with the NL Champion Phillies taking on the AL Champion New York Yankees.
There's Only One October: I'm in uncharted territory here in terms of excitement and I'll admit this whole thing seems a little surreal. After so many years of watching bad Phillies teams and saying, "Maybe next year," the Phillies are in the World Series for the second year in a row. Hard to believe.
This is Beyond Baseball: Also for the second year in a row, we'll be happily Joe Buck and Tim McCarver-free for the World Series. Fox will be muted and Scott Franzke and Larry Andersen will provide us with the play-by-play on the Phillies radio broadcast.
Phillies Probables: Cliff Lee, Pedro Martinez
Yankees Probables: CC Sabathia, A.J. Burnett
Posted by Jim at 12:00 PM

Team Phungo has posted their prediction

I tried that for the ALCS...but couldn't get the timing right. The radio delay was less than the tv delay. Muted with closed captioning was still better.

The Phils' flagship radio station (1210 AM) has sync'd up with the TBS (or now the Fox) broadcast. The had commercials urging listeners to "turn down the TV and turn up the radio."