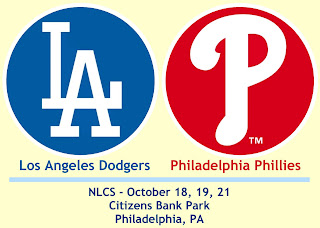 What's what: The best-of-seven NLCS is tied at one game a piece. The Phils have their work cut out for them as the Dodgers boast the NL's second best regular season road record. (The Phillies owned the best road record in the NL.) My heart would love a three game sweep, but my brain would be happy with taking two out of three and wrapping it up back in Los Angeles.
Sunday night forecast: 42 degrees with a 60% chance of rain for game time. Just slightly different than the weather both teams experienced in Los Angeles.
Sunday night's first pitch: Former Phillies catcher Darren Daulton, who has been providing pre and post-game analysis on the local Comcast channel, will throw out the ceremonial first pitch. Dutch has apparently decided to take a break from exploring different dimensions to offer his insights into the Phillies Postseason run.
Dodgers Probables: Hiroki Kuroda, Randy Wolf, TBA
Phillies Probables: Cliff Lee, Joe Blanton, TBA
Posted by Jim at 12:00 PM