One of the best songs from the Beatles' farewell album Let It Be is the hopeful rocker, "I've Got A Feeling." Well tonight I had a feeling, a hopeful feeling, and I watched my first ever Phillies Postseason game completely and totally relaxed. No standing in front of the TV. No pacing the living room floor. I just watched the game, while listening to the Phillies radio broadcast, and I enjoyed myself. (We originally had tickets to tonight's game, but that's a happy story for another day.)

Cole Hamels pitched like 2009 Cole Hamels tonight and not 2008 Cole Hamels. Andre Ethier homered in the 1st to give the Dodgers the early lead. In the bottom of the 1st, Dodgers starter Vicente Padilla worked around Chase Utley and Ryan Howard, walking both, only to allow a 3-run home run to the clutch Jayson Werth. Both teams traded home runs in the 2nd - James Loney for the Dodgers and the free-swinging Pedro Feliz for the Phils, and it was 4-2 Phillies after two.

Raul Ibañez' RBI-double to right in the 4th scored Jayson Werth and chased Padilla from the game. Later in the inning, after a very patient at-bat, Shane Victorino was hit with the bases loaded to give the Phils a 6-2 lead. Cole Hamels' night was done shortly after allowing a solo homer to Orlando Hudson in the top of the 5th. At this point, the game was over two hours old and still just in the 5th inning. But it didn't matter. I was still smiling.


At 10:40pm EST, Shane Victorino's 2-run home run made it 8-3 Phillies and the Dodgers' 2009 season all but ended. Jayson Werth would add a final bomb in the 7th and the Dodgers would make a little noise in the 8th, but I bet at this point the Phillies traveling secretary was on the phone cancelling the team's chartered flight to Los Angeles. 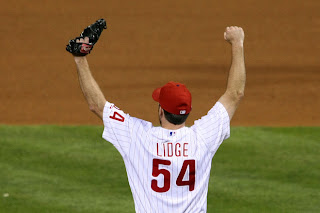 While Cole Hamels has yet to recapture his 2008 mojo, the much-maligned Phillies bullpen seems to have found its groove. Chad Durbin shut the Dodgers down in the middle innings, Chan Ho Park pitched a scoreless 7th, and Ryan Madson stranded the bases loaded in the 8th. Brad Lidge entered in the 9th to close it out, and close it out he did. After two quick outs, Ronnie Belliard lifted a fly ball to Shane Victorino who caught the ball for the final out.

Can you believe it? The Philadelphia Phillies are heading to the World Series for the second straight year. The on-field celebration following the game was decidedly low-key. As Jayson Werth mentioned after the game, there's still four more games to win. Or as Ryan Howard put it, "One more step, and we got action."  I'm still smiling.

Spectacular performance by the Phillies offense.

A pleasure...a pleasure, I too, sat through the whole game

The early move by Manuel to replace Hamels in the 5th was a good one. The Dodgers had a chance to get back in the game and the bullpen shut 'em down. Hopefully the Phils can take care of the Yankees in the Series.

They made it look easy didn't they? And the Dodgers are a very strong team.

Early in Charlie's tenure, I was one of his detractors who fell into the whole country bumpkin persona trap. Turns out, the guy knows baseball and he's the perfect manager for this team.

For the record - still smiling.