Are you kidding me? Jimmy Rollins hit a 2-out, 2-run walk-off double in the bottom of the 9th to win Game 4 and give the Phils a 3-1 lead in the NLCS.

A two-run home run from Ryan Howard in the 1st inning continued his torrid streak and gave the Phils an early lead. Phillies starter Joe Blanton was cruising until the 4th, when the Dodgers tied it up 2-2.

As Joe Blanton began to falter, Dodgers starter Randy Wolf was beginning to settle in. Following Ryan Howard's 1st inning home run, Wolf retired the next 12 Phillies in order. Matt Kemp hit a solo home run in 5th, and the Dodgers tacked on another run in the 6th to make it 4-2.

The Phils added a run in the 6th when Shane Victorino tripled to left and came around to score on a Chase Utley single. The team threatened in the 8th, but stranded two more base runners.  Brad Lidge held the Dodgers scoreless in the top of the 9th and the Phils were down a run with three outs to go. Dodger closer Jonathan Broxton needed three outs to tie the series at two games a piece, and guarantee the NLCS would return to Los Angeles. 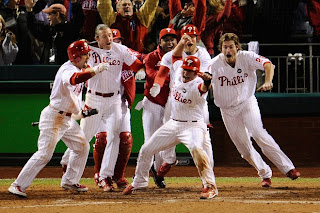 With one out in the bottom of the 9th, pinch-hitter Matt Stairs drew a four-pitch walk and Carlos Ruiz was hit by a pitch. Broxton jammed pinch-hitter Greg Dobbs, coaxing a weak line drive to third for the second out of the inning. At this point, the Dodgers bullpen had not allowed a hit since Chase Utley's 6th inning RBI-single. Jimmy Rollins, who had struggled at the plate in the NLCS, was the team's final hope.

With the count at 1-1, Jimmy drilled a 99mph Broxton fastball to the gap in right. Pinch-runner Eric Bruntlett scored from second to tie it. Carlos Ruiz scored from first to win it. And with a win Wednesday night, the Philadelphia Phillies will head to the 2009 World Series.

I fell asleep on the couch when it was 4-2. I woke up seconds before Rollins' hit. That is a whoooooole lot to parse so quickly. Good ball, there.

I couldn't go to sleep until about an hour after the game finished. I could probably use a nap right about now.