The last and only other time the Phillies and Yankees faced each other in the World Series was in 1950. The Whiz Kids advanced to the 1950 World Series by defeating the Brooklyn Dodgers at Ebbets Field on the final day of the season. The Phillies' starting pitcher in that game was Robin Roberts, who in the heat of the pennant race had started four of the Phillies' previous eight games. (Take that, CC.)

On October 1, 1950, entering the final game of the season, the Phils' lead over the Dodgers was down to just one game. A win, and the Phillies would advance to the World Series for the first time since 1915. A loss, and a tie-breaking game to determine the National League championship would be required. And of course, the Phillies wouldn't make it easy.
Heading into the bottom of the 9th that day, the score was tied 1-1. In easily what is one of the most famous outfield assists in 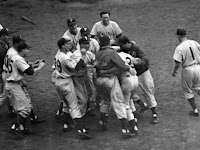 Phillies history, Richie Ashburn threw out Cal Abrams at the plate to preserve the tie and send the game into extra innings. In the top of the 10th, with Whitey at first and Eddie Waitkus at second, Dick Sisler hit a 3-run home run against Don Newcombe to give the Phils a 4-1 lead. Roberts pitched a 1-2-3 bottom of the 10th, and it was on to the World Series.
Of course, the 2009 Phillies hope to fare better than the 1950 Phillies against the Yankees.
Posted by Jim at 12:00 PM

Email ThisBlogThis!Share to TwitterShare to FacebookShare to Pinterest
Labels: 1951, Roberts

The 1950 /51 Bowmans of Roberts are absolute classics. I'll be pulling for your boys in the WS!

I'm surprised Robin's arm didn't fall off during those years. He was a horse.

Every time I read about Robin's accomplishments, I'm amazed.