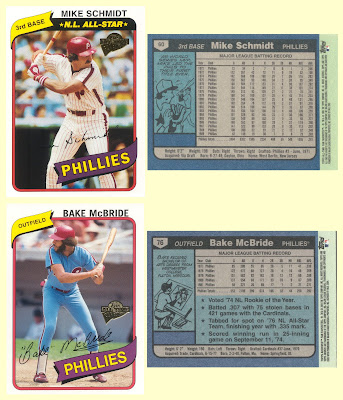 2003 Topps All-Time Fan Favorites #60 Mike Schmidt
2004 Topps All-Time Fan Favorites #76 Bake McBride
Dean Family - This post is for you. The 2003-2005 Topps All-Time Fan Favorite sets featured two Phillies cards borrowing the 1980 Topps design: Mike Schmidt and Bake McBride.
In my previous post on these sets, I failed to mention what I really enjoy about these cards - the card backs. The backs are true to the original design, but they feature complete career statistics for the featured player during his tenure with the team displayed. So the back of Mike Schmidt's card features his entire career statistics, and Bob Dernier's card features his complete Phillies stats from his two tours of duty with the team. This was a nice touch by Topps.
A few other notes:
- There are 22 Phillies cards spread throughout the three years' of sets. Mike Schmidt appears in each of the three sets. John Kruk and Lenny Dysktra both appear in two of the sets.
- Personal favorite Kent Tekulve does not appear as a Phillie, but he's in the 2003 set featured as a Pirate on the 1984 Topps design.
- I am puzzled as to why I don't own these complete sets.
Posted by Jim at 2:02 PM

I didn't know about that set. I'll need to investigate it and see about getting a hold of the Giants in the set. :)

This is one of my most favorite modern sets of all-time. I think I've devoted 2 or 3 posts to it already.

Thanks for the post! I am rapidly learning about this set, also thanks to night owl. I had no visibility on these cards until recently. I plan on posting about these 1980 versions sometime soon.

I wish Topps would bring this idea back. It must not have been a huge seller, otherwise I imagine they'd still be producing these sets annually.

Yeah, I'm a big fan of the sets; I got all three for Christmas last year and I've really enjoyed them. I am a diehard Phillies fan, like you, and there are a lot of great Phillies cards in the set, including a sweet '83 Sarge, '67 Bunning and '61 Robin Roberts. I like the Roberts so much that I was lucky to find an autographed version, it's a great card.

I highly recommend the three sets, they are a lot of fun. Some interesting cards are included as well, such as a Sy Berger (key Topps figure), Rudy Guiliani on the '55 style and John Elway drafted by the Yankees on the '81 style. Pretty cool.

CK - You're right, it's a great Robin Roberts card!