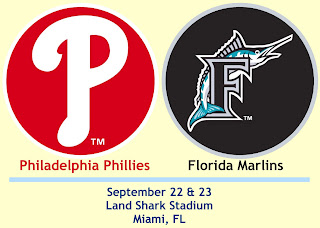 Records: Phillies 87-61, 1st Place in NL East (8 games ahead of the Braves and the Marlins); Marlins 80-70, 2nd Place in NL East (8 games behind the Phillies)
Are you ready for some baseball?: The double header is a result of the NFL scheduling a Monday Night Football game in Miami last night, even though the Marlins-Phillies game was there first. It's the Dolphins' stadium, so they call the shots.
Magic Number: 6
Home Field Advantage: The Phillies, Cardinals and Dodgers head into the final two weeks of the regular season battling for the best record in the National League. The team with the best record will be awarded home field advantage throughout the NL Playoffs and will face the Wild Card in the first round. Unless the Dodgers finish with the best record, either the Phils or the Cardinals will face the Rockies (the likely Wild Card) in the NLDS. (The team with the best record can not face the Wild Card in the first round of the Playoffs if both those teams are from the same division.) In summary, the Phils could be facing the Rockies, Dodgers or Cardinals in the NLDS. We just don't know yet.
Phillies Probables: Joe Blanton, Jamie Moyer, Cole Hamels
Marlins Probables: Josh Johnson, Anibal Sanchez, Rick VandenHurk
Posted by Jim at 12:00 PM