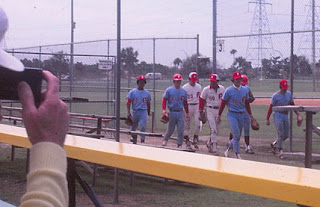 My Mom continues to scan and discover old family photographs taken by my Pop-Pop throughout the '50s, '60s and '70s. She recently came across slides from a Spring of 1978 trip taken by my Nana, Pop-Pop, Uncle Dell and Aunt Becky to Clearwater, Florida - the Phillies' Spring Training home. My Mom asked if I could identify any of the players in a picture snapped by my Pop-Pop. (That's my Uncle Dell's hat brim and right arm, snapping a similar picture at the same time.) Based on my research, here's what I've found:

- I can clearly make out players wearing #41 and #16, and what appear to be coaches wearing #23 and #59. (I wonder why the players are wearing their baby blue away uniforms?)
- Pitcher Jim Lonborg wore #41 for the Phils from 1973 until 1979, and that's definitely not Lonborg in the picture. Therefore, I'm guessing these are minor league players.
- Both Jim Morrison and Todd Cruz wore #16 for the Phillies in 1978. I suppose the player pictured here could be Todd Cruz, but I still believe this is a minor league work-out featuring a few pitchers and catchers. Cruz was primarily a middle infielder. 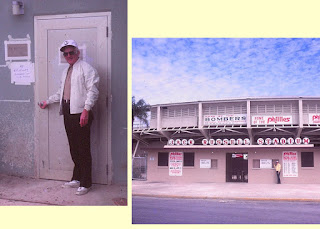 - I was fairly certain coach #59 was Bobby Tiefenauer . . . until I looked it up and found Tiefenauer had worn #5 during his tenure as a Phillies' coach.

In summary, I have no idea who these people are. I know they are Phillies, and most likely minor leaguers. I also know my Pop-Pop appeared to have had a wonderful time on this trip.

Even though it's probably not Todd Cruz: Todd Cruz played in three games for the '78 Phils before going on to find relative success as a role player in the American League with the Royals, Angels, White Sox, Mariners and Orioles from 1979 until 1984. As an Oriole, he started all five 1983 World Series games against the Phillies as the O's third baseman. He's got a World Series ring, but he's never been featured on a baseball card as a Phillie until now. I used the 1978 Topps design and Todd's picture from the 1979 Phillies Yearbook for the card.
Posted by Jim at 2:21 PM

Well I am fairly certain the first pix was taken at the practice facility. I have been there a couple of times but it has been several years. Jack Russell stadium (latter photo - where the Phils would have played back then) is not located in that area. - I haven't been to the new stadium but from what I understand it is now next to the practice facility. I was there about 4 or 5 years ago and the Practice facility looks a lot the same today - workouts there take place early and perhaps the players were playing an intrasquad game - thus the different unis or were dressed to go to split squad games following the workouts.

Thanks for the info. It makes sense the players would be in away unis if they were playing a split squad game.

We made it down to Clearwater a few years ago, and the practice facilities are all within close proximity to the new stadium. We'll go back one day . . .

I'm going to try to hunt down a 1978 Spring Training program to try to figure out who these guys are.