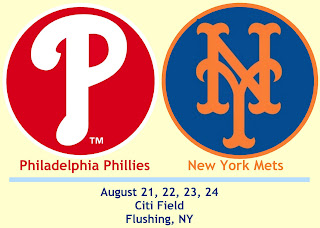 Records: Phillies 69-49, 1st Place in NL East (6½ games ahead of the Marlins and Braves); Mets 56-65, 4th Place in NL East (14½ games behind the Phillies)
Put 'Em Away II: Before the Diamondbacks' series began, I hoped the Phils would go 7-3 during the current 10-game stretch. Now I'm hoping for 9-1. The Mets are hurt. They're hobbled. Gary Sheffield is beginning his annual bout of pouting. (Aren't we glad he didn't end up with the Phils?) The Mets are nine games under .500 and 16 games behind the Phils in the loss column. Winning three out of four this weekend against the Mets could prove to be the final blow to a crumbling team. (And I may have smiled a little when I typed that.)
Sunday Afternoon TV Alert: Pedro Martinez will face his former team in the Sunday matinee. We'll be watching.
Phillies Probables: Cole Hamels, J.A. Happ, Pedro Martinez, Cliff Lee
Mets Probables: Mike Pelfrey, Tim Redding, Oliver Perez, Bobby Parnell
Posted by Jim at 12:00 PM