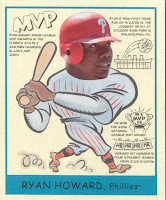 Another day, another key home run for Ryan Howard. The Phils' slugger went deep off the Braves' Rafael Soriano in the top of the 9th inning tonight to give the Phils the 1-run lead and the eventual victory. Brad Lidge allowed a few base runners in the bottom of the 9th, but he successfully recorded three outs to notch his 22nd save.
Joe Blanton started the game for the Phils and lasted seven innings, surrendering only one earned run and allowing seven Braves' hits. Chase Utley provided the initial offense for the team, hitting his 24th home run in the 4th inning with Shane Victorino on base. The Flyin' Hawaiian also contributed two circus catches against the outfield wall to help preserve Joe Blanton's ERA.
Closing Out: Jenna had complete confidence in Brad Lidge tonight, but I will admit he made me a little nervous (again).
Posted by Jim at 10:25 PM

Email ThisBlogThis!Share to TwitterShare to FacebookShare to Pinterest
Labels: 2007, Howard

And I will continue to have faith in him.