Hershel Ray Martin was not a Pinky or a Dutch or a Spud – he was just a Hersh. 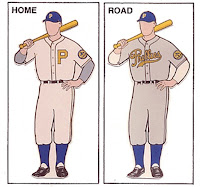 in 1980 at the age of 71.
The Uniforms: It's hard to see the full Phillies uniforms on these Play Ball cards, as the standard pose seems to be along the lines of "pensive swing while looking earnest." The players' posed swing completely obscures the Phillies wordmark on the front of the jerseys. Given the patch on Hersh's left shoulder on his Play Ball card, it appears as if he's wearing a 1938 Phillies uniform which was - believe it or not - blue and gold. (Image from the Baseball Hall of Fame Uniform Database.)
Posted by Jim at 12:00 PM

Email ThisBlogThis!Share to TwitterShare to FacebookShare to Pinterest
Labels: 1939, Martin

these old cards are great!!!