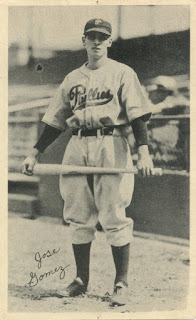 The oldest card in my collection as of this writing is now this 1936 National Chicle Fine Pen Jose Gomez card. Roughly the size of a standard postcard, the Sports Collector Digest Standard Catalog of Baseball Cards explains, "The cards, known in the hobby as 'Fine Pen' because of the thin style of writing used for the facsimile autographs, were originally available as an in-store premium." One could then assume that National Chicle was a store?

In any event, the "card" feels more like a piece of old fax paper, and it’s flimsier than a standard postcard. There’s nothing on the back except a few 70-year-old stains. There are 5 Phillies cards in the set, including Dolph Camilli (2 cards), Pinky Whitney, Jimmie Wilson and Jose Gomez.
Listed at 5'10" and 165 pounds, Jose "Chile" Gomez played only three seasons in the Majors – 1935 and 1936 with the Phillies and 1942 with the Washington Senators. At the time of his debut, he was just the second Mexican-born player to play in the Majors and he's the first Latin American player to play with the Phils. As a middle infielder and wearing #22, Chile hit .231 as a Phillie with 44 RBI. He never hit a big league home run.

In his native Mexico, Chile played parts of 17 seasons in the Mexican League and he was elected into the Mexican Professional Baseball Hall of Fame (Salón de la Fama del Beisbol Profesional de México) in 1971. Chile died in 1992 at the age of 83.
Posted by Jim at 12:00 PM

Chicle Fine Pen is my new favorite set of cards