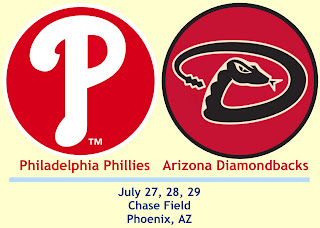 Records: Phillies 56-40, 1st Place in NL East (6½ games ahead of the Braves and Marlins); Diamondbacks 43-56, 4th Place in NL West (19½ games behind the Dodgers)
Former Phillies with the Diamondbacks: Former Phillies' closer Tom Gordon is on the 60-day disabled list with a hamstring injury, although reports are that he's close to returning to the team. He's thrown just 1.2 innings this year in the Majors. Current Diamondbacks' manager A.J. Hinch played briefly with the Phillies in 2004. He took over the team on May 8, following the dismissal of Bob Melvin.
The Phillies Room Sleep Deprivation Worries III: I'm not going to do it this week. I can't stay up and watch these late games in Arizona and San Francisco. I have to be well-rested and ready to give it my best each day at work this week, so I'll watch the first inning of each game and then turn in early. (Or I'll probably watch every game and be completely exhausted by the weekend).
Phillies Probables: Jamie Moyer, Cole Hamels, J.A. Happ (or whoever he's traded for . . .)
Diamondbacks Probables: Jon Garland, Dan Haren, Yusmeiro Petit
Posted by Jim at 12:00 PM

Weekends are too important...get the sleep