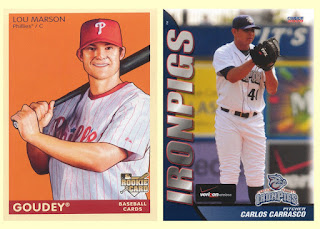 The Phillies Room bids a fond farewell to the quartet of prospects traded this afternoon to the Cleveland Indians. Of the four, only catcher Lou Marson (2008-2009) spent time with the Phillies, appearing in 8 games, going 6 for 21 (.286) with a home run. We watched Lou catch for the AAA Lehigh Valley IronPigs a few weekends ago.

Right-handed pitcher Carlos Carrasco entered the year as the Phillies' top pitching prospect, but he's struggled so far this season. With the IronPigs, Carlos had a record of 6-9 and a 5.18 ERA. Shortstop Jason Donald has struggled as well with his transition to AAA, hitting just .236 with the IronPigs. Jason won a bronze medal with Team USA at the 2008 Beijing Summer Olympics. I'm assuming Lou, Carlos and Jason will all report to the Indians' AAA team, the Columbus Clippers. Interestingly enough, the Clippers are visiting Lehigh Valley for a 3-game series this upcoming weekend. 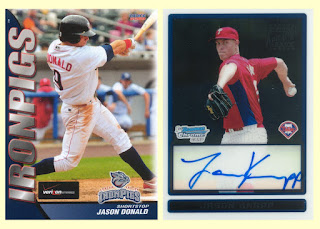 Jason Knapp is viewed by many as the centerpiece of the deal for the Indians. In 85.1 innings with Low A Lakewood this summer, Jason has 111 strikeouts to just 39 walks. However, Jason was recently shut down with "shoulder fatigue."

I think this is a great deal for the Phillies, and the deal has future upside for the Indians. The only question remaining for the Phillies - who gets bumped from the starting rotation to make room for Cliff Lee?
Posted by Jim at 10:24 PM

Lopez will probably be the first to be bumped. And surprisingly, I would say Happ will be the next once Pedro reports to the club.