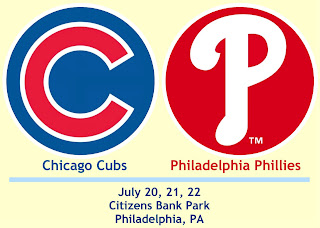 Records: Cubs 47-43, 2nd Place in NL Central (2 games behind the Cardinals); Phillies 51-38, 1st Place in NL East (6½ games ahead of the Braves)
Former Phillies with the Cubs: There was a time in the mid '80s when it seemed as if everyone on the Cubs roster was an ex-Phillie. Today, after browsing the Cubs website, the only ex-Phillie I could find was Ivan DeJesus (1982-1984), listed simply as "coach". (Strange since everyone else's coaching duties are listed - pitching coach, hitting coach, 1st base coach, etc.) My favorite Phillie growing up, Bob Dernier (1980-1983; 1988-1989), is the team's minor league outfield/baserunning coordinator. Carmelo Martinez (1990) is the Latin American field coordinator for the Cubs.
This should be good: The Phils have won 8 in a row. The Cubs have won 4 in a row and (like the Phillies) are starting to turn it on.
Cubs Probables: Ted Lilly, Rich Harden, Carlos Zambrano
Phillies Probables: Rodrigo Lopez, Joe Blanton, Jamie Moyer
Posted by Jim at 12:00 PM

The Phils' look like they have the weaker end of the pithing holding the fort up against the Cubs this week. Hopefully they can hold them off with the offense. Please comment on my blog or just check it out :) http://philliesguy.blogspot.com/

Good luck with your blog!